Michigan. – In-laws…bill collectors…door-to-door salespeople. While the list of unwanted visitors to Michiganders’ homes can be endless, Rose Pest Solutions contends the brown recluse spider will almost certainly not be one of them. 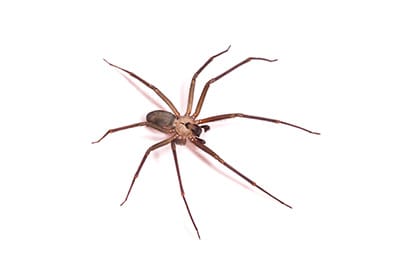 “Brown recluse spiders are pretty rare in Michigan as we are outside of their natural range,” says Rose Entomologist and Vice President of Technical Services Mark “Shep” Sheperdigian, B.C.E. “They are prevalent in the country’s middle, western and southern states and can be found in southern Ohio. They do not, however, extend into Michigan.”

Individuals will often self-diagnose and health professionals can misdiagnose approximately 40 different medical conditions as brown recluse bites. “There are many explanations that should be ruled out before determining a bump or sore is from a brown recluse bite,” says Sheperdigian. “The only way to be certain is to actually see the spider.”

This species lives communally in other parts of the country where homeowners will seldom find only one, but rather an infestation of dozens or even hundreds. While it is possible for a brown recluse to be transported into Michigan via a box or other container, it is not common and even less likely that a structure will become infested. Suggesting that milder Michigan winters are conducive to a growing brown recluse spider population is unfounded as they aren’t being discovered with any regularity, as well as not being found in outdoor locations.

Brown recluse spiders generally thrive indoors. They are not aggressive and only bite when they are provoked. Though their bite can be serious, mysterious wounds identified as brown recluse spider bites are more likely to be caused by ticks or a Staphylococcus bacterial infection.

In their combined 44 years with Rose Pest Solutions, Sheperdigian and his fellow entomologist and Manager of Education and Training Mark Vanderwerp, have seen only one confirmed brown recluse spider infestation in Michigan in a home where previous tenants had moved in from Kansas, a key brown recluse locale.

“We know it can happen, but we see no indications that it’s common or should be a major concern for Michigan residents,” adds Vanderwerp.

To test the premise that brown recluse spiders are extremely rare in Michigan, Rose Pest Solutions invites residents of the Great Lakes State to submit a photo of one or more suspected brown recluse spiders found in or around their home to spider@rosepest.com. Submissions must include the homeowner’s name, address, phone number, and email address. Any Michigander submitting an identifiable brown recluse spider image from his or her home will receive a complimentary residential visit and inspection. If brown recluse spiders are detected, Rose will provide free treatment to eradicate the infestation, as well as provide a $300 reward. The offer runs through Friday, Sept. 28, 2018.

What’s the gimmick? That’s what Jennifer Spencer said her husband’s reaction was when Rose Pest Solutions announced its complimentary treatment and $300 reward earlier this summer for confirmed Brown Recluse infestations in the State. The couple had recently moved to MI from Oklahoma, an area with a healthy brown recluse population, and had accidentally “packed” some of the critters along with their belongings. The Spencer residence was one of five Michigan residences uncovered so far during Rose’s Brown Recluse promotion.

“We’re happy to report that Rose is still a solvent and profitable company,” jokes Manager of Education and Training Mark Vanderwerp, while standing firm that Brown Recluse spiders are a rarity in Michigan. “The houses with confirmed Brown Recluse populations, have had direct connections with parts of the country where Brown Recluses are known to live or had been purchased with the spiders already inside. Brown Recluses can survive here if someone drops them into a suitable environment. However, one important point supported by our promotion is that nobody is finding these things out in their yards.” VanderWerp claims that this fact really challenges some of the stories claiming that people have been bitten by brown recluses when gardening or camping.

Despite the handful of confirmations, Vanderwerp assures Michiganders the threat from Brown Recluse spiders is very small:

“While it’s too early to confirm whether or not we’ve eradicated any of these populations with the complementary treatment, said Shep, Vice President of Technical Services for Rose Pest Solutions, “We know that we’ve given the spiders a run for their money. If, against the odds, you do have an infestation there certainly is no reason that you have to continue to live with it.”

“The vast majority of photos we’re receiving are indeed brown spiders,” says Vanderwerp, “but they’re not Recluses. This time of year the spiders that are confusing homeowners are harmless Funnel Weaver/Grass spiders in the Genus Agelenopsis. It’s okay to have a fear of spiders, a lot of our clients do, but it’s not reasonable to be afraid of getting bitten by a brown recluse in this State.”

For more information about Brown Recluse or any spider, contact spider@rosepest.com.

Having trouble getting rid of spiders?