Each termite colony has its own society made up of specialized levels or castes, each with a different responsibility:

What type of termites do we have in Michigan, Ohio and Indiana?

The Subterranean termite (Family Rhinotermitidae) is the type of termite most commonly found in Michigan, Ohio and Indiana 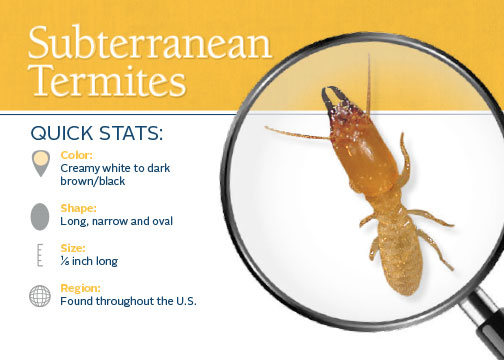 Subterranean termites live in underground colonies or in moist secluded areas above ground. They build distinctive "mud tubes" to gain access to food sources and to protect themselves from open air. Like other termite species, they feed on products containing cellulose. Subterranean termites swarm in the spring when groups of reproductive termites go off to start new colonies.

Subterranean termites are by far the most destructive termite species. The hard, saw-toothed jaws of termites work like shears and are able to bite off extremely small fragments of wood, one piece at a time. They can cause severe property damage.

Difference between flying ants and termites

No, termites do not pose an immediate physical threat to humans as they do not bite and do not carry any diseases that can be transmitted to humans. That said however, termites can still pose an indirect threat to humans. They have a great capacity to cause untold damage to wooden structural members in properties, causing failure of those columns and beams and possibly even total collapse if the problem is not investigated and rectified.

How do you get rid of termites?

Rose Pest Solutions recommends the Sentricon Colony Elimination System which is designed to eliminate any termite infestations you may have and protect against future termite activity. Sentricon® Termite Colony Elimination System is effective termite elimination and control. It’s proven to eliminate the colony – not just individual termites and provides environmentally safe protection 24/7 with continued service.

Can I do it myself?

Due to the complex nature of investigation and treatment, do-it-yourself termite control and eradication is generally not something many people have success at. When in the wrong hands or mixed and used improperly, pesticides can be hazardous to humans, animals and plants, therefore the best answer for your termite pest problem is Rose Pest Solutions' Termite program.

How soon can you get here?

Contact your nearest Rose Pest Solutions service center immediately for an appointment.
In many cases, we can respond within 24-48 hours.

Is the treatment safe?

Rose Pest Solutions uses the latest methods to rid you of your pests and all products we use have been tested and registered by the EPA. We follow a series of very stringent guidelines for the use of the product, as laid down by the EPA so that whatever method of control we use poses no threat to people, pets, or plants. Should any specific safety measures need to be taken, our highly trained service technicians will make sure you have a thorough understanding of them.

How can I prevent this in the future? For Year Round Protection Consider The Rose Home Service Program.

With the Rose Home Service program, you pay one annual price and receive 12 months of protection. It's guaranteed to protect your home against common household pests.  Our home service program includes pre-scheduled interior and exterior services over a 12-month period. If additional visits are needed, we will come out at no charge to you – it’s part of our guarantee to keep your home pest-free!